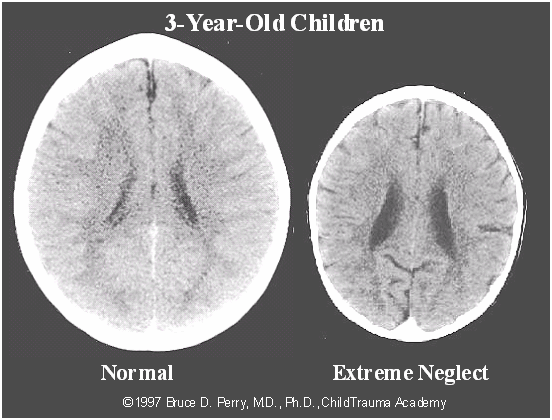 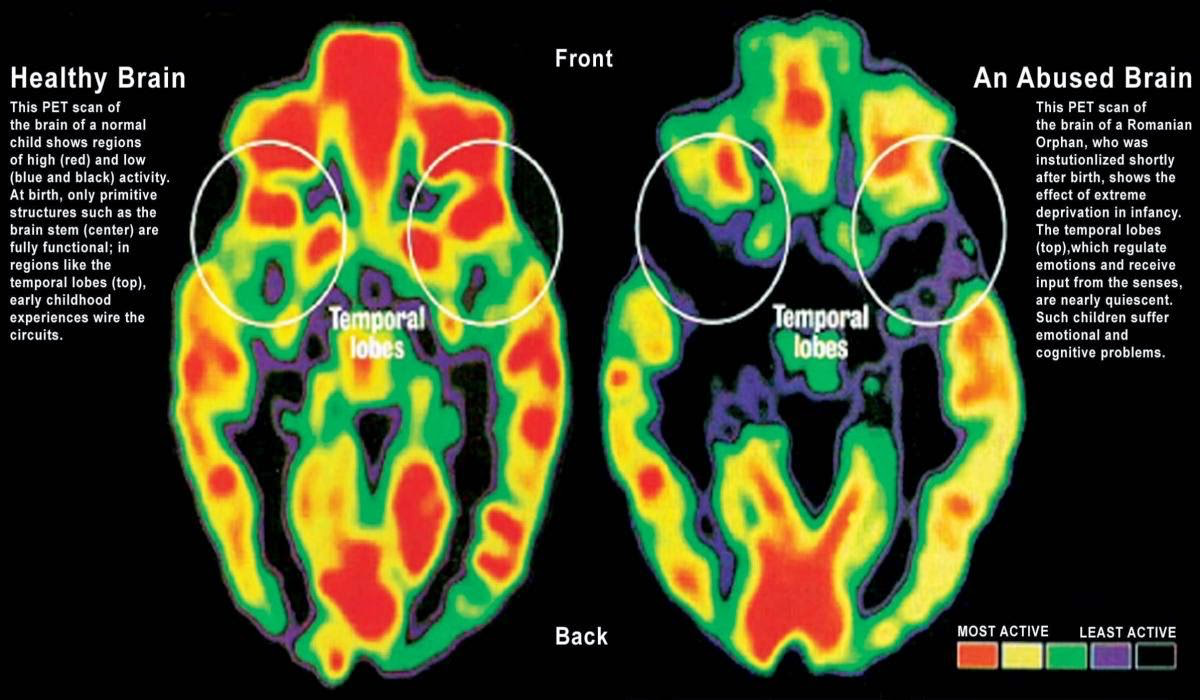 Here you see two brain scans – on the left is a scan of a healthy three-year old child next to a scan of a three-year old Romanian orphan who suffered severe sensory deprivation. The neglected child’s brain is smaller and has enlarged ventricles (holes in the center of the brain). It also shows a shrunken cortex (less outer layer brain tissue). The image on the below shows the PET scans of the same children: healthy child on the left and the Romanian orphan on the right. The normal child shows regions of high (red) and low (blue and black) activity. On the right side of the PET scans, the Romanian orphan’s brain shows empty space in the temporal lobe region, or the areas that relay emotions and receive input from the senses. There is also less brain activity, shown by the decreased amount of red in the front and sides of the brain. These differences show how children affected by abuse and neglect suffer emotional and cognitive problems later in life.

Earlier in our blog series, we discussed how a child’s environment is equally as important as their genetic makeup when it comes to brain development. Today we will discuss how negative experiences, in particular, can affect the growing brain. Exposure to alcohol, drugs, and nicotine can cause developmental delays or disabilities. Severe depression and emotional stressors during pregnancy also have negative outcomes, as they produce chemicals transmitted from the mother to the baby, and can interfere with the developing brain.

Child Abuse and Neglect is defined as an act of failure to act by a parent, caregiver, or guardian that results in physical abuse, neglect, medical neglect, sexual abuse, or presents an imminent risk of harm to a child.

In addition to having immediate detrimental effects on children, abuse and neglect is also shown to affect the long-term health and well-being of the children in their adult lives. Long-term effects can include – psychological effects of depression, post-traumatic stress disorder, and anxiety; social effects of poor peer relations, difficulty working, and increased aggression; and increased risk behaviors including alcoholism and early sexual activity. 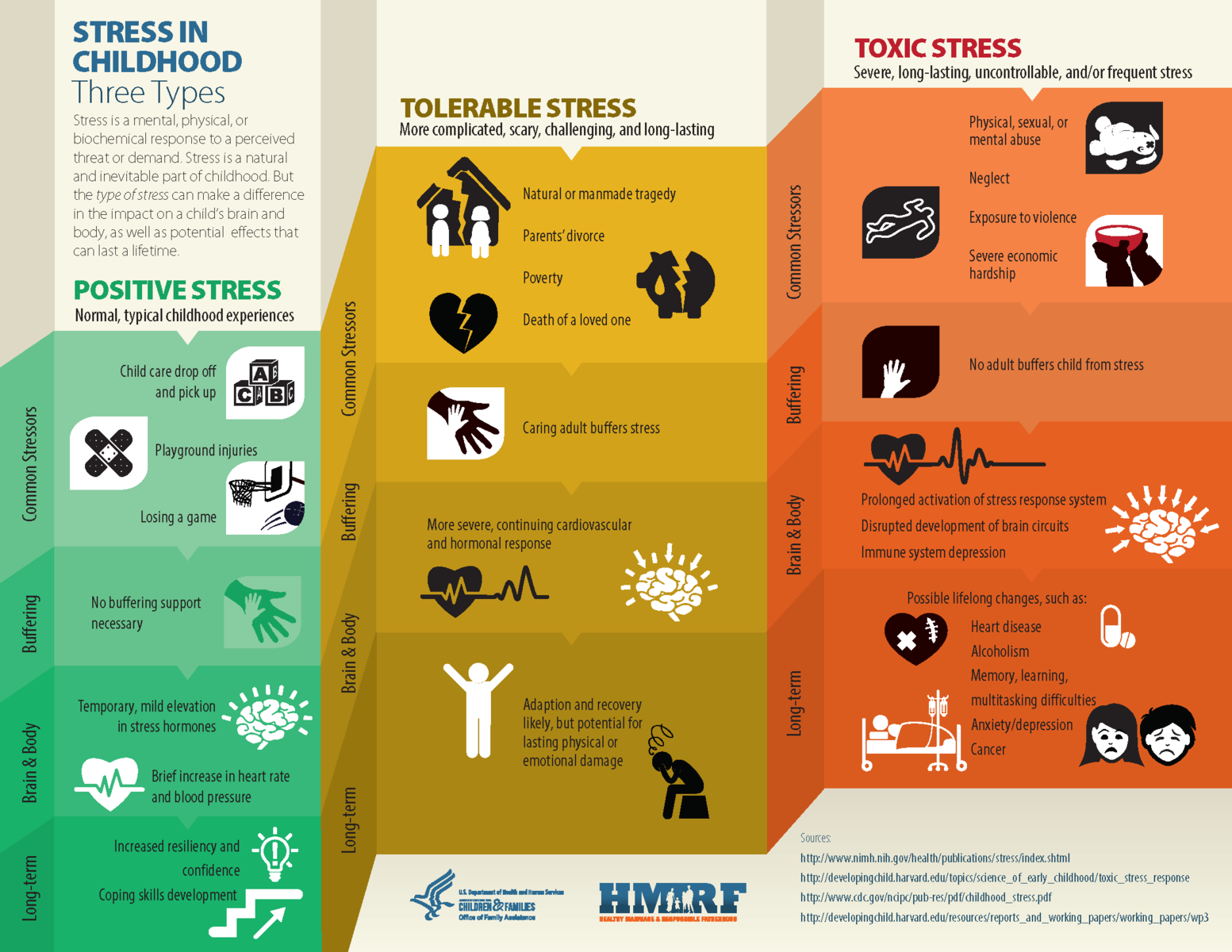 Strong negative experiences trigger basic instincts for survival in infants. High levels of stress can lead to the destruction of brain cells in certain areas of the brain. If the stress continues, it can damage brain structures, interrupt messages between neurons, and lead to loss of learning and memory. It can also produce physical illnesses including digestive and immune disorders. When it comes to stress, it’s important to know the difference between stressors that are needed for a child’s growth and development and those that will have negative impacts down the road.

While babies exhibit reactions to stress from birth in the form of crying, they don’t know how to calm themselves down yet. This is where you come in. You can’t help shield your baby from all stressors, but you can certainly help them deal with it at times. Teach them how to cope by holding them or rocking them, talking or playing with them, or giving them a bath. Don’t leave the baby to “cry it out” when he is upset, as letting a baby deal with stress on his own will not make him a “tougher” adult. Babies cannot stimulate their own brains and depend on trusting adults like you to help them!

Autar, N. (2014, May 29) Child Abuse, Neglect, and Stress in the First and Third World. Its Long and Short Term Effects. [Image]. Retrieved from http://nikhilthegrizzlybear.blogspot.com/2014/05/child-abuse-neglect-and-stress-in-first.html

Rhodes, J. (2015, Nov 16) What is toxic stress and why does it matter for youth mentoring programs. [Image]. Retrieved from https://chronicle.umbmentoring.org/what-is-toxic-stress-and-why-does-it-matter-for-youth-mentoring-programs/